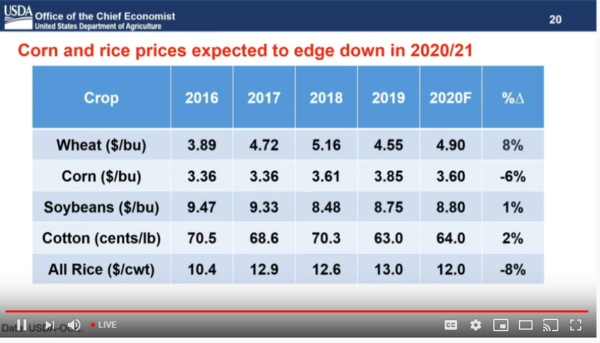 The USDA’s chief economist is projecting an increase in most cropland acres for the 2020 growing season.

Wheat and cotton acres are projected to remain steady or decline with more acres expected to be planted to rice.

He says the anticipation of a return to normal trade should help soybean prices this year.  “Soybean prices will rise modestly,” he says.  “Up a nickel to $8.80 a bushel this coming year.  Supported by lower stocks compared to last year’s record level.”

As for corn prices, Johansson says, “In contrast, corn is expected to decline $.25 to $3.66 a bushel, with larger corn acres and an expected return to trend yields.”

Johansson made his remarks at the 2020 Ag Outlook Forum in Washington, DC.

The post USDA’s acreage, price projections for 2020 appeared first on Voice Of Muscatine.