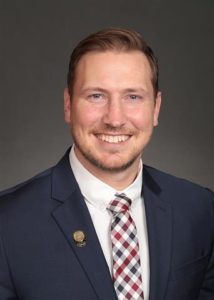 A few kids who’ve operated lemonade stands in Iowa have had a sour experience — with the law. Representative Ray “Bubba” Sorenson of Greenfield says that’s because the iconic child-run lemonade stand is technically illegal in Iowa.

“This bill looks to right that wrong,” Sorenson says, “so we don’t continue to have headlines like: ‘Iowa police shut down 4 year old’s lemonade stand.’”

The bill passed the House last night by unanimous vote.

“I think it’s great to encourage young folks to get out there and be young entrepreneurs,” said Representative Sharon Steckman of Mason City.

In 2011, police shut down at least three lemonade stands in Coralville the kids didn’t get a permit or under a health inspection to run a food stand on the day RAGBRAI — the Register’s Annual Great Bike Ride Across Iowa — came to town.

Representative Mary Mascher of Iowa City voted for the bill, but aired this concern about lemonade and food stands run by children: “If parents are going to choose to allow their kids to do this, they also need to know that there’s some liability involved and if someone does get sick, or if there is a problem in any way, shape or form that, in essense, the parent’s insurance would have to cover that.”

In the past couple of years, lawmakers in Texas and Utah have passed laws legalizing lemonade stands set up kids. A few cities around the country have cracked down on kids — including Girl Scouts — selling cookies. The bill passed by the Iowa House would give kids under the age of 18 a pass on having to apply for business and food permits if they sell baked goods as well as beverages.

This news is a service of Radio Iowa.