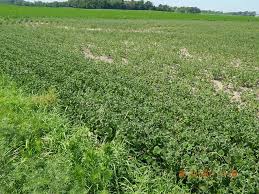 2020 could be an especially difficult year for controlling weeds.

“And I would say in some years, such as going into 2020, it’s going to be even more of a challenge. Particularly for those who had prevent plant acres, or even just had a difficult time controlling weeds last year.”

He tells Brownfield that’s because so many weeds were able to go to seed.

“Whether it was because of delayed planting, thin stands due to poor emergence, or issues getting back into the field.”

The post 2020 could feature intense battle to control weeds appeared first on Voice Of Muscatine.