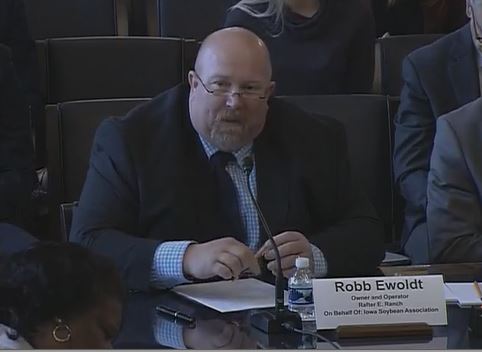 Two farmers testified this morning before a House Ag Subcommittee on the need for more trade. Robb Ewoldt, a grower in Davenport, Iowa and member of the Iowa Soybean Association says he remembers when China’s tariffs hit and soybean prices dropped in 2018, “We saw it drop to $2.00 below world prices. I already had the crop planted. Like most of the farmers we thought it was going to be short-lived. We thought that they (China) really needed our soybeans and we were going to come out of this pretty quick. {sigh} That did not happen.”

Ewoldt does not own his farmland – therefore he doesn’t have a lot of equity, “To say that stress is very high in my house between my wife, myself, it is. You know, I’m not going to give up.” He’s been driving a truck at night to help pay the bills.

James Jacquier of LaurelBrook Farm in Connecticut testified on behalf of the National Milk Producers Federation, “Dairy is a prime example. The USDA shows the U.S. lost more than 6,000 dairy farms over the last two years. That’s over eight per day representing a 15% decline!” Jacquier says lowered tariffs and fairly negotiated trade agreements provide hope to farmers, however, if the U.S. cannot combat non-tariff barriers, like Europe’s use of Geographical Indicators to block the export of American-made cheeses, the trade wins are limited.

Both men say even with some strides in trade agreements, more export markets are needed and the administration and Congress should work together to make it happen.

The post Farmers lay out trade pain at hearing appeared first on Voice Of Muscatine.