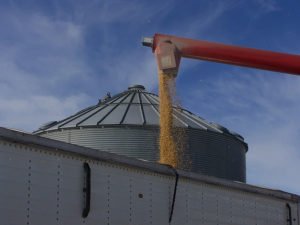 Grain bin safety has become top of mind following multiple entrapments across the Midwest this winter.

“I did get a chance, as well as my husband, to be a part of the demonstration and the simulator that was there. I couldn’t believe that once you’re in grain, it’s hard to move.”

She tells Brownfield a Minnesota farmer who was trapped in a grain bin last year spoke about his experience.

“He’s still dealing with the pressure that was put on him from all that grain, and he doesn’t anticipate being better for another couple of months according to his doctor.”

Schroeder says it’s startling how quickly the grain moves, and how long it takes to save someone.

“The average person gets saved in rural America in about three and-a-half hours. So that’s a lot of time to try to save somebody in a terrible situation.”

Minnesota Farm Bureau vice president Dan Glessing says during a grain bin safety incident, it’s important to turn off power to most of the equipment.  But he warns not to turn off aeration fans because they can get air to the person submerged in the grain.