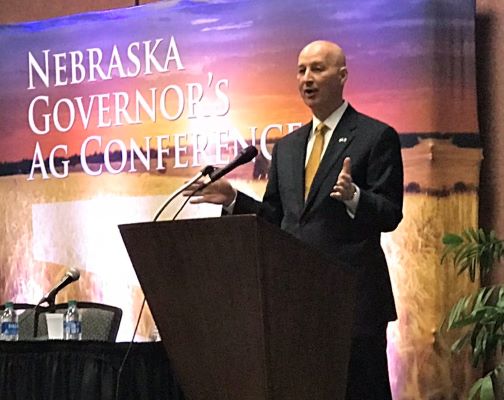 Nebraska Governor Pete Ricketts, speaking Monday at the Governor’s Ag Conference in Kearney, made a strong plea for passage of LB 974, the property tax relief bill in the Nebraska Unicameral.

“It’s absolutely critical that we get this passed,” Ricketts said. “We’ve got this window of opportunity right now. We need to get this bill passed right now.”

The bill would lower valuations on ag land, for taxing purposes, from 75 percent to 55 percent, phased in over three years.  Residential and commercial valuations would drop from 100 percent to 87 percent. State funding to schools would increase to offset the reduction in property taxes.

“And we will have expense controls in the bill, to ensure that that money goes into property tax relief and not more spending,” Ricketts said.

Ricketts admits getting LB 974 passed will be a challenge.  Bill sponsor Senator Lou Ann Linehan says she’s still a few votes short of the 33 needed to overcome a likely filibuster.

A second round of debate on LB 974 could take place this week.