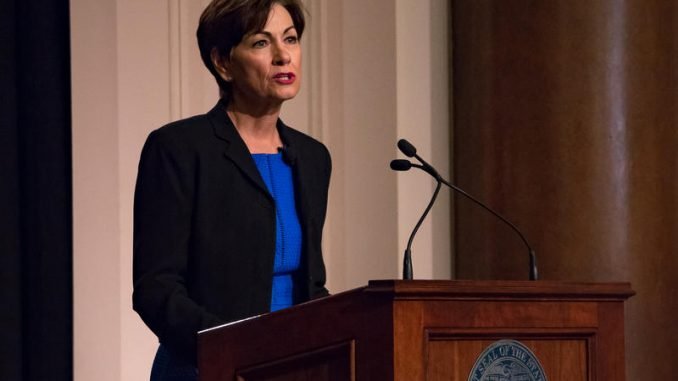 Gov. Kim Reynolds on Wednesday said the data shows Iowa hospitals have not been overwhelmed with COVID-19 patients and test results show the disease is not prevalent in the 77 counties where she’s lifted some restrictions.

“I shouldn’t punish half of the state when we’ve got a significant spike in eight areas,” Reynolds said.

Reynolds announced this morning that 93 percent of the state’s new COVID-19 cases are in the 22 counties where business closures related to the pandemic remain in effect.

A recent University of Iowa analysis suggested statewide restrictions should remain in effect. Reynolds said the research provided a “snapshot in time,” while other data shows portions of the state are on a healthy path.

“On a daily basis we’re learning more and it’s rapidly changing as we’re gathering information,” Reynolds said. “We’re really able to look at things on a case-by-case, real time basis and so I think it makes sense to start to loosen up in areas that have seen little to no virus activity.”

There have been no confirmed cases of the novel coronavirus reported in 15 of Iowa’s 99 counties. After nearly six weeks of business closures and a record number of unemployment claims, the governor said she has an obligation to protect the health of Iowans as well as their livelihood.

“It’s not sustainable for us to continue to lock the state down,” Reynolds said. “We need to start to open it up in a responsible manner in areas where we feel we’ve seen a stabilization and a downward turn.”

The governor and public health officials continue to advise Iowans to stay home if their age or health condition makes them especially vulnerable to growing seriously or fatally ill if they catch the virus, but Reynolds said some of the steps she’s taken in the past week are necessary moves to begin reopening the state’s economy.

“That is how we’re going to have to manage COVID-19 as we move forward,” Reynolds said. “I didn’t just rip the BAND-AID off or flip the light switch. We’re doing it in a reasonable, phased in approach. We’ll continue to look at the data and we’ll continue to work with Iowans and I believe in Iowans and I know they will do the responsible thing.”

Reynolds announced this morning at her daily news conference that the deaths of another dozen Iowans are linked to the virus and the state reports 148 Iowans have died of COVID-19 since March.