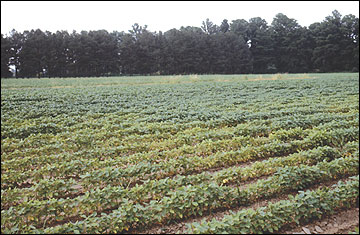 MU: Soil tests for SCN a must

Bissonette tells Brownfield Ag News, “This year, the best practice advice really is getting out into the field and taking some of those soil tests, especially following a season where we saw a lot of flooding and movement of Soybean Cyst Nematode around the state.”

She says the cysts are light enough to float, “Especially those that are close to the soil surface, they can actually float on the water and they can move from one place to another.”

Bissonnette recommends collecting at least 15 core soil samples for every 20 acres, six to eight inches deep and an inch wide. Collecting should take place in a zig-zag pattern, she says, and the soil should err on the side of dry.

SCN has been established in Missouri longer than some other states, so the growth rate is lower. But, Bissonnette says fields that have tested at zero or low levels should continue to be tested – and – the ones with established high counts managed in order to reduce soybean yield losses.