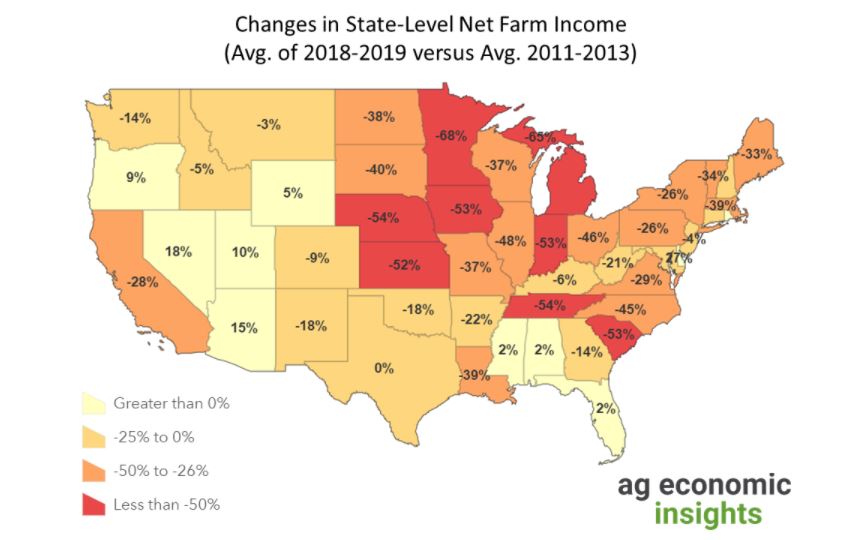 A recent analysis of net farm income finds the Midwest and Great Plains have seen the greatest swings and direct farm payments have made up a larger portion for farmers.

Ag economist David Widmar compared farm economy booms in 2011 through 2013 to 2018 and 2019 to find where the trade war had the greatest impact and the role of direct payments through programs like the Market Facilitation Program.

He says the Midwest and Great Plains were hardest hit during that period.

“Michigan for example—net farm income has contracted 65 percent since the boom era.  Minnesota was down 68 percent.  Those two states have been hardest hit.  If you think about the ‘I’ states—Indiana down about 53 percent, Illinois down 48 percent, Iowa down 53 percent.”

Widmar says some areas like Wisconsin during that period didn’t hit an income peak and decline as severely as other states and other factors like weather challenges play into some individual states with less pronounced income swings.

Direct payments to farmers in 2018 and 2019 were about 22 percent of net farm income but Widmar says some states had much higher rates.

“North Dakota was at 50 percent, Minnesota was at 53 percent, Arkansas was at 59 percent.  The Midwest and Northern Great Plains—anywhere from 35+ percent of net farm income in these states are coming from those direct payments.”

Widmar says just as each farm is different, payments to producers are not uniform and there are additional factors that lead to regional variations in the farm economy.

For 2020, USDA is estimating $40 billion in direct payments are expected to make up 36 percent of net farm income.