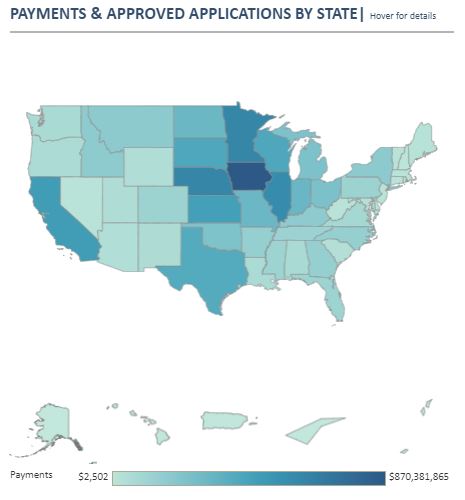 The pace for direct payments to farmers as part of the second Coronavirus Food Assistance Program is starting to slow.

As of November 1st, the agency had approved nearly $8.8 billion, up slightly more than one billion dollars from last week and the lowest week over week increase since payments began.

Payments to corn growers remain at the top of the list at nearly $2.5 billion, followed by cattle with more than $1.9 billion, sales commodities moved up again for another week to more than $982 million, soybeans at nearly $947 million, and milk at more than $877 million.

Sales commodities include specialty crops, aquaculture, nursery crops and floriculture, and other commodities not included in the price trigger and flat-rate categories.

Farmers in Iowa continue to receive the most payments at $870 million, followed by Nebraska with almost $604 million, Minnesota with nearly $599 million, Illinois with $567 million, and California moved up into the top five at nearly $467 million.

Wisconsin dairy farmers represent more than twice the amount of applications for milk payments and have received the largest portion of the funds making up more than 20 percent of payments with more than 4,500 applicants approved to receive more than $187 million.

Dairy farmers in California, New York, Michigan, and Minnesota make up the remaining top five states and about a third of applications and payments of the more than $877 million made so far.