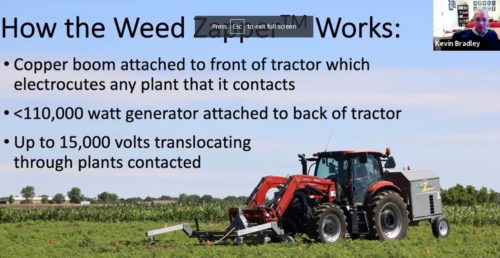 The University of Missouri weed science department is studying non-conventional weed remedies for conventional crop systems. Dr. Kevin Bradley, during the virtual MU Crop Conference, says he’s gotten some pushback because most farmers are herbicide-centric, “We think that the number one way we’re going to be controlling weeds in the future and now is with a herbicide. Maybe it is, maybe it isn’t. But, that’s where we are in agriculture. We’ve been conditioned to think that way.”

Bradley says waterhemp is worse in Missouri today than it was 17 years ago. They’ve recently studied the electrocution of waterhemp with a system that is often used in organic farming, “I believe this has the greatest fit as a weed rescue tool when all other efforts have gone awry and we have nothing else that we can throw at a field.”

He says the key with the Weed Zapper is to make sure the waterhemp is tall enough to kill with minimal damage to soybeans.

Bradley says the university is also studying the seed terminator which has shown some success in eliminating many but not all weed seeds during harvest.

With both non-conventional methods, Bradley still recommends the use of conventional herbicide applications with multiple modes of action.