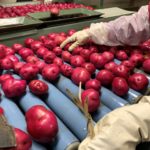 The National Potato Council is disappointed Congress couldn’t reach an agreement on ag labor reform in the lame duck session. CEO Kam Quarles says it was too heavy of a lift to include in the year-end spending package.

“The second part: unfortunately, agriculture was divided again on the needs for ag labor reform. We’ve had three major efforts at this in the last almost 20 years: 2005, 2013 and 2022.”

Quarles is not optimistic ag labor reform will be possible in 2023.