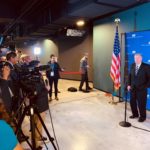 Ag Secretary Tom Vilsack says the US will not compromise with Mexico over its proposed ban on biotech corn.

“Ambassador (Katherine) Tai has had conversations recently with her counterpart,” he said. “The message is pretty simple. We believe in a science-based system.”

Speaking to reporters at the 2023 American Farm Bureau Convention in San Juan, Puerto Rico, Vilsack says he told Mexico’s President Andres Manuel Lopez Obrador the US could enforce its legal rights under the USMCA if an acceptable resolution cannot be found.