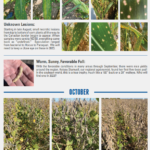 “It was really surprising. You know, we take pride as agronomists to look at something and be able to figure out what it was. But really it was kind of different, we started seeing some brown necrotic lesions but really didn’t identify with anything.”

He tells Brownfield lesions were found in the Dakotas all the way up to the Canadian border.