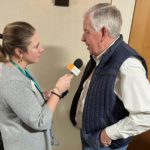 Governor Mike Parson says infrastructure investments remain a priority, especially in rural areas. During his state of the state address, Parson said he would like to see another lane added to I-70, along with continued updates to bridges and “crumbling rural roads.”

“Thanks to our rural routes program established in last year’s budget, 1,700 lane miles of low volume roads in the lowest conditions will be re-surfaced by June of this year.”

While the Missouri Soybean Association doesn’t have a stance on rural infrastructure investments this session, Senior Policy Director Casey Wasser tells Brownfield the investment in rural roads is needed.