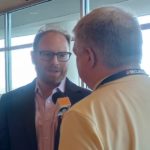 A political analyst and elections expert says creating the next farm bill might have an unseen obstacle.

David Wasserman with The Cook Report says, “There’s no doubt that the House is going to be the bottleneck for the 2023 Farm Bill.” Wasserman tells Brownfield House Speaker Kevin McCarthy’s agreed to put three Freedom Caucus members on the House Rules Committee, which means four Democrats and nine Republicans. “But if you have three Freedom Caucus members that are blocking something, it’s possible that one Democrat could come over and vote with more mainstream Republicans to set rules for debates and amendments that allow a farm bill to get done.”

Wasserman says it’s unknown which three Freedom Caucus members will be on the Rules Committee, so predicting when the farm bill will be done is difficult.