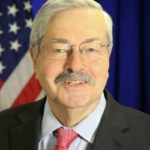 Former US Ambassador to China Terry Branstad has been named the new president of the World Food Prize Foundation.

Branstad, who is also the former governor of Iowa, will help lead the organization in its efforts to combat hunger and enhance food security around the world.

Branstad succeeds Barbara Stinson, who served three years as president before her departure this month. Former foundation president ambassador Kenneth Quinn has rejoined the organization as a special consultant during the initial transition period.