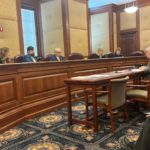 The chairman of the Missouri Senate Agriculture Committee says lawmakers in the committee will likely vote on three foreign ag land ownership bills in the next week.

During a committee hearing on Tuesday, bill sponsor Jason Bean said the language should be tightened, including restricting five countries, including Russia, China and North Korea, from purchasing Missouri farmland.

“In an attempt to keep our warriors safe at home, we initally had language that our bill would apply to a buffer around military installations, but that proved problematic.