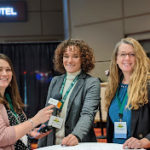 The rate of farmland loss is being highlighted as part of the Great Lakes Crop Summit.

“I think what a lot of folks don’t realize about the loss of farmland is how fast its been occurring,” she says.  “A rate of four acres per hour statewide between the 2012 and 2017 Ag Census.”

Nationwide, she says American Farmland Trust research is finding a large reason behind the loss is also tied to zoning.