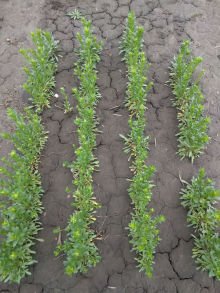 Researchers at the University of Minnesota are developing cash cover crops.

“So a winter cover crop is planted in the fall, it initiates growth, then goes dormant over the winter, and has some harvested product the following spring or summer.”

The hope is the cover crops will offer an economic incentive in addition to the soil health benefits.

He tells Brownfield camelina and field pennycress show the most promise because they both have high oil content.

“We’ve experimented here at the University with planting them into a standing corn crop, and the results aren’t real good. It’s hard to get really good establishment.”

Anderson sees potential for pennycress in biofuels and camelina as a food-grade oil.

While marketing for these cover crops is already underway, he says the commercial release of the varieties is still several years away.

The post U of MN researchers developing cash cover crops appeared first on Voice Of Muscatine.