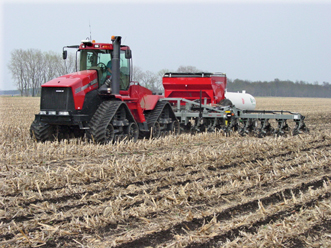 The disappearance of snow is giving farmers in Minnesota hope that fieldwork can begin soon.

“Recently at our southwest experiment station at Lamberton indicated there was still frost depth at least 26 inches under bare ground.”

He tells Brownfield soil temperatures have been stuck in the mid 30’s at two to four inches deep.

“We have to be careful in terms of rushing our fieldwork (because of) compaction, soil structure, etc. And of course, we’re not even into April.”

Nicolai says farmers are hoping to plant small grains as early as possible.  He cautions against planting corn before the federal crop insurance window opens the second week of April.

The post Farmers see encouraging signs of an early spring appeared first on Voice Of Muscatine.