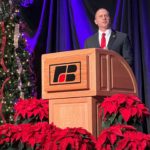 Some ag groups continue to express disappointment in the Environmental Protection Agency’s final Waters of the U.S. rule.

“It’s clearly a return to more uncertainty and more red tape for farmers and others who work the land,” he said. “That’s the frustration.”

He tells Brownfield the timing of the final rule was another concern.