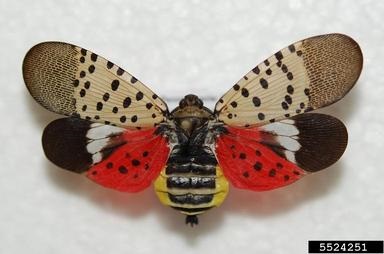 The Michigan Department of Agriculture is asking for increased vigilance to help identify an invasive species that could damage at least 70 different crops in the state.

USDA has confirmed several reports of dead Spotted Lanternfly in Michigan in recent weeks and the department says there is no evidence of established populations.

Spotted Lanternfly is an invasive species found in the U.S. in 2014 in Pennsylvania and has been moving across the East Coast, with confirmed reports also found in Ohio.

If introduced, the department says it could seriously affect Michigan’s agriculture and natural resources, damaging more than 70 varieties of crops and plants including grapes, apples, hops, and hardwood trees.

Spotted lanternfly adults are about one inch long. Their folded wings are gray to brown with black spots. Open wings show a yellow and black stomach and bright red hind wings with black spots that turn to black and white bands at the edge. Egg masses look like old chewing gum, with a gray, waxy, putty-like coating.

The state is asking people in transportation to become familiar with identifying the insects, which can attach to vehicles or goods, and report them to the Department of Agriculture.